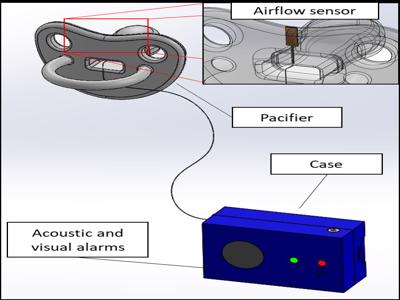 Sudden Infant Death syndrome, known as SIDS, is the unexplained death of children less than one year of age. SIDS is the leading cause of deaths among babies, in fact, every year, 1 out of 6 infant deaths is caused by this syndrome. It is not possible to predict SIDS, however, using a medical device that can highlight life-threatening situations allowing you to act on time, can save life. Our device is a breathing monitor system, that can be used to prevent SIDS and to diagnose night time anomalies, such as infant sleep apneas. The device is a simple system consisting of a pacifier, a flow sensor, and a case containing battery, acoustic and two visual alarms (one indicates the battery charge level, the other the sensor working). It belongs to class IIa medical devices and it is compliance to European ISO standards. Using the device has several advantages: safety for the baby, peace of mind for the parents, diagnosis of nighttime infant apneas, sudden intervention in case of accidental suffocation, decrease of child mortality percentage. The system can also be further improved, adding, for example, a thermometer that constantly measures temperature.