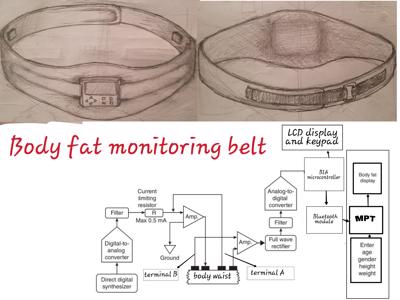 Simple waist belt to monitor and analysis body fat in human body which works on bioelectric impedance principle connected to software that guides users through how to speed up their lipolysis and help them stay in shape with health and fitness related tips.
According WHO

This non-invasive test simply involves the placement of two electrodes on the waist. A low level, imperceptible electrical current is sent through the abdominal part of the body. The flow of the current is affected by the amount of water in the body. The device measures how this signal is impeded through different types of tissue. Tissues that contain large amounts of fluid and electrolytes, such as blood, have high conductivity, but fat and bone slow the signal down. As BIA determines the resistance to flow of the current as it passes through the body, it provides estimates of body water from which body fat is calculated using selected equations. Following this data the user will be guided through to achieve a healthy body fat level using a mobile application.