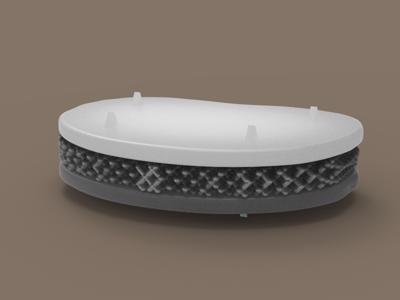 The problem was raised by a physiotherapist, who had noticed that those patients operated on for herniated discs, lost mobility in the spine after surgery. This was due to the use of surgical steel fixation bars that immobilize the vertebrae between which the damaged disc was located.

Our proposal is that instead of removing the disc and placing the bars, an intervertebral disc will be designed to replace the damaged one. This disc should be able to perform all (or almost all) of the natural disc's movements, thus reducing the patient's discomfort.

To achieve this goal, we have designed a brand new intervertebral disc implant composed by a pair of plates and a reticular mesh between them, all made by 3D printing and fully customizable.