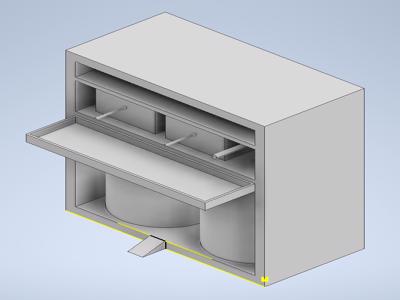 The automated Hand Washing / Sanitizing System consists of an automated system that controls the flow of dispensed water and soap/ sanitizer, and also for the waste disposable system while having a minimum-contact backup system in case of power outage or malfunction of the primary system.

This device is intended to be used by placing hands under the dispenser which will be registered by the sensors to dispense a pre-determined amount of sanitizing fluid and after water for washing until the hands are removed to cut the process.

This device has the clinical benefit of prevention of transmission of pathogens from contact with contaminated surfaces and also raising the awareness of the public about their personal hygiene through the availability of the device, its ease of use and having posters on it to educate further.

Individuals from all disciplines, backgrounds and establishments, with no prerequisite extensive knowledge on how the device works can operate the device. Common sense and rationality are more than enough, and since it is automated it is easily understood by all age groups. Above all, there will be signs demonstrating on how the device is used.

However, the device does rely on the availability of both electrical and water supply which could be scarce to find in some areas, therefore, a backup water storage tank and a battery in case of power outage. Also incorporated is a minimum-contact manual back up system that can used after prolonged power outage when battery runs out. It involves a foot pedal that when pressed releases water and detergent until pressure is released.